A Cultural Evolution for the Sisters and Brothers who ain’t here yet.

A Cultural Evolution for the Sisters and Brothers who ain’t here yet.

On Juneteenth last year, WQXR radio aired a listener call-in show for artists of African descent to share their experiences in classical music. We called it “Black Experience in the Concert Hall.” We talked about the good times as well as the challenges. Composers Alvin Singleton and Wynton Marsalis talked about their orchestral music. Martina Arroyo talked about her days singing at the Metropolitan Opera and Bobby McFerrin talked about his and his father’s careers. Music critic Greg Sandow and Jesse Rosen of the League of American Orchestras discussed the lack of diversity in American orchestras. After our call in show aired I received a message from a publisher asking if I would be interested in writing a book on Blacks artists in classical music. It’s no secret, it’s actually more of a tradition, that Black musicians constitute less than 3% of those who play in professional orchestras. For those who find that low percentage problematic, the solution has always been in the realm of education and outreach. My feeling is that’s just a small part of it.

As a kid growing up, I was exposed to classical music, just like many of the other kids in the public school system.  I took piano and trumpet lessons but quickly learned that the pinnacle of accomplishment on my instruments was the concert hall, and more specifically, the symphony orchestra. When I went to see my hometown orchestra, I saw one Black musician and he didn’t look particularly happy sitting back there. My friends and their parents didn’t go to hear the orchestra and even at that early age it didn’t feel like a place where I would be welcomed because of how I looked. No matter how much I practiced, my skin never magically turned white.

My forthcoming book is called Concert Black. I discuss how blackness has been depicted in classical music over the centuries and how that has informed the modern classical ecosystem. In many American cities you’ll find two communities of classical musicians and organizations: one Black and one white.

A focal point in Concert Black is a moment in time when those two communities came together in New York in the 1960s to form the first professionally integrated orchestra in the country. Symphony of the New World played concerts from 1965-1978, and at one point more than 80% of its subscribers were people of color. They performed at Carnegie Hall, Philharmonic Hall, and at churches, parks, and schools around the city. Sponsors of the orchestra included Ruby Dee, Leonard Bernstein, Langston Hughes, Aaron Copland, and Gian Carlo Menotti. A critical moment for the orchestra happened in 1971 when the surge of the Black Power Movement met the American tradition of European Cultural Entitlement. 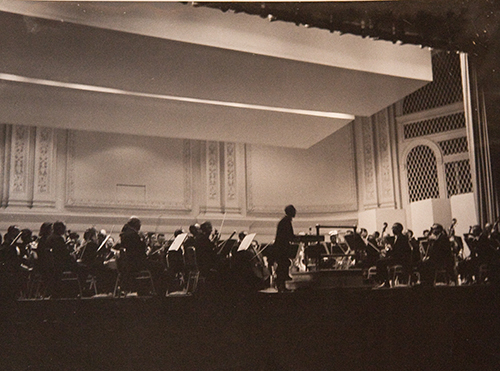 "My friends and their parents didn’t go to hear the orchestra and even at that early age it didn’t feel like a place where I would be welcomed because of how I looked. No matter how much I practiced, my skin never magically turned white."

On October 10, 1971, 2,200 people were in the audience in New York’s Philharmonic Hall to hear the season opening concert by the Symphony of the New World. This orchestra was one of a kind: more than 35 of its 80 players were of African descent. Two minutes before concert time, some of the players refused to go on stage.

Gail Hightower: I don't think they liked [Music Director] Ben Steinberg. I don't know all the details, because I was still a student at Manhattan School. But there was a rift, a breakdown.

The twenty disenchanted musicians wanted the first cellist to be replaced. When that was agreed to, they made more demands. Now, it was after the 3 p.m. start time and the audience was getting restless.

Fred Alston: Some of the people in the cello section, some of the Black folks wanted a Black conductor. They were not satisfied.

In a 1967 New York Times article, orchestra member Ronald Libscomb, who protested that day in 1971, reportedly said, “what we want now is a Black Orchestra, Black owned, Black operated and Black controlled.”

Steinberg agreed to resign following the concert, which promptly began at 3:05 p.m.

After my father was forced to resign, he would pace the living room floor, whispering violently. His arm pounded on an imaginary table. His silent tirades went on for hours. "What is he doing?" I asked my mother. "He's just practicing. Don’t worry,” she said. One night he yelled, and my mother rushed to find he had broken a blood vessel in his eye.

Alston: One of the things that hurt me about that Symphony Orchestra was Benjamin Steinberg, this Jewish bleeding heart liberal, bless his heart, got this orchestra together, he called all the Black conductors, then he went out and got the money.

After Steinberg’s resignation, the orchestra continued to give concerts until 1978, although it never fully recovered financially.

The Symphony of the New World was successful in building new audiences for and for accomplishing multiculturalism in the concert hall. Duke Ellington and the Modern Jazz Quartet performed with this orchestra. Marian Anderson and Martina Arroyo appeared with the orchestra. there were Black conductors and composers regularly represented and more than a few Asian musicians were in the ranks, which was rare for the times. The Symphony of the New World was where our cultural institutions say they want to be.

Terrance McKnight is the Evening Host on WQXR, New York City’s only Classical Music Station. While at the station he has written and produced award winning  programs and documentaries. His subjects have included Dr. Martin Luther King Jr., Langston Hughes, Florence Price and Hazel Scott  and others. He is the Artistic Advisor for the Harlem Chamber Players and serves on the board of MacDowell.  Terrance regularly curates concerts and talks at Merkin Concert Hall, the Billie Holiday Theatre, the Schomburg Center for Research in Black Culture, the Metropolitan Museum of Art and the Museum of Modern Art.