We’re on a deep-sea journey with Sandbox Percussion, the quartet comprising Jonathan Allen, Victor Caccese, Ian Rosenbaum, and Terry Sweeney, on a mid-December evening. A dappled white light sparkles through a hazy blue-green glow as they play subtle scratches over a blaring bass beat, conjuring the roughness of the sandy ocean floor and the sense of mystery that lives at the bottom of the ocean.

They’re playing the live world premiere of Bathymetry, a new work by violinist and composer Matthew McBane that came out on recording in November on Cantaloupe Music. The piece takes its inspiration from the concept of bathymetry, which is the study of the depth of bodies of water—or underwater topography. McBane’s fascination with the ocean derives from his childhood in San Diego, and his music, which pairs delicate textures with deep resonances, finds a depth like that of the ocean, painting an enthralling picture of the vast underwater world.

Before Sandbox begins, McBane performs three new works for solo violin and electronics. Each piece features repeating violin melodies that become cloaked by rich electronics; as McBane plays, he’s bathed in dramatic red lights, which mimics the intensity of the music. But despite the immersive vibe, these three pieces don’t land. McBane’s violin seems to be in a constant state of playing catch-up with the backing electronics it mimics, never quite uniting, and the sweet timbre of the violin often becomes overwhelmed. 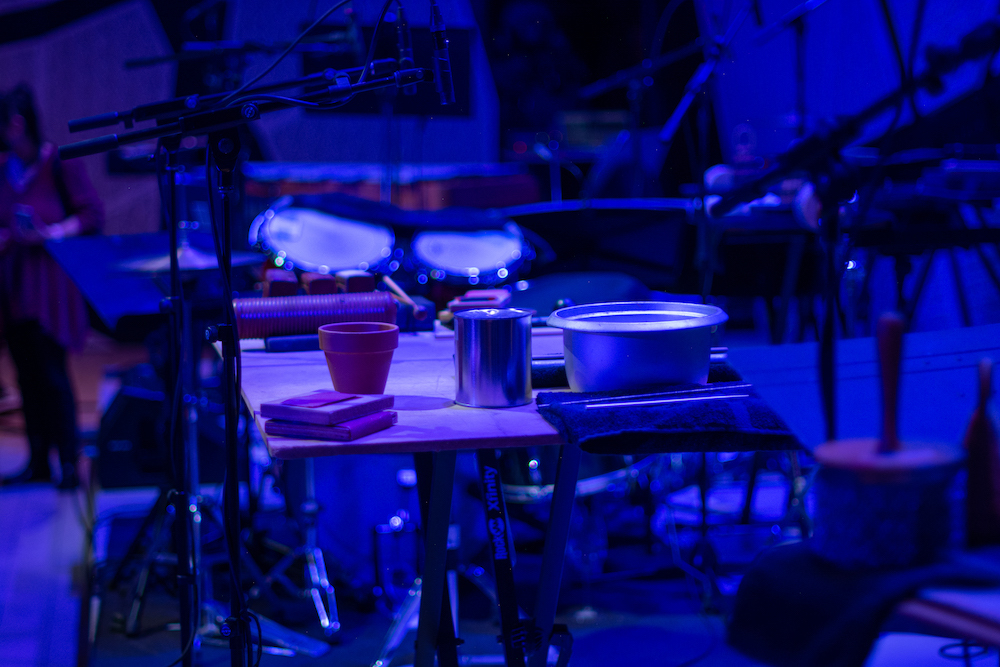 But when Sandbox takes the stage, everything clicks. Their performance launches us into the unknown; it feels like the musical equivalent of watching Blue Planet and learning about the strange animals that dwell in the deep ocean. Much of the music pairs scritchy-scratchy ASMR sounds made by small objects like flower pots, wine glasses, and metallic sheets with heavy, low bass tones, playing with the push and pull between the two textures. Throughout their performance, Sandbox expertly balances this seesaw between sparseness and fullness, but when they lean into cavernous grooves, their music feels its most hypnotic. During “Groundswell,” the fifth movement of the piece, they pull out two drum sets, layering repetitive, pulsing grooves between buoyant electronics and crescendoing to a fever pitch that glimmers across the room.

It’s just a second of sprawling sound, though—once this peak fades away, they return to eerie quietude, bathed in bright yellow and pink lights as a newfound sense of melancholy sets in. Though Sandbox and McBane’s quirky sounds captivate us, it’s these moments of reflection that feel the most poignant. Within every unexpected note, there’s a feeling of appreciation, a palpable love for the ocean and the lives it houses.

Vanessa Ague is a violinist and critic who writes for publications including the Wire, Pitchfork, and Bandcamp Daily. She is a recent graduate of the Craig Newmark Graduate School of Journalism at CUNY.