It started with a Facebook message. In 2019, Andrew Yee had been talking to fellow cellist Jules Biber about the invisibility of queerness in chamber music, and decided to DM singer Danielle Buonaiuto, who had just been posting about similar thoughts she had been sharing with another singer, Brian Mummert. The four quickly hit it off, and soon founded ChamberQUEER, an organization dedicated to uplifting the queer classical music community and performing the music of queer composers of the past and present. A last-minute grant from the Brooklyn Arts Fund helped launch their inaugural season, and they’ve been working to make space for queer ways of making music and community ever since.

I had interviewed Yee and Buonaiuto shortly after the group’s founding, so I was curious to hear how things had changed over the past three tumultuous years. “We have a very similar mission to when we started out,” Buonaiuto said, when I asked what was different now, “But our interpretation of it has broadened. We’ve always existed to be a platform for queer artists and performers and composers, but now a new multidisciplinary wave is expanding that into other mediums as well. We took a stab at a mission statement back in 2019, and I feel like the practice has really helped us broaden what we mean by it.”

Unavoidably, much of this broadening has been shaped by the coronavirus pandemic, which derailed the group’s plans for an in-person Pride festival in their second year. Undaunted, they decided to move to an online format. But rather than creating a top-down framework that they then asked performers to fill, they approached performers directly, building their programming in collaboration with the artists they were working with. The result was a festival programmed from the bottom up. “It was an artist-centered thing; we said, ‘Hey, what do you want to do with this platform?’”, Buonaiuto explained, “And that’s something that we want to keep going forward. Yeah, we’re planning concerts, but we’re keeping artists at the center of that rather than us dictating a theme and having them try to slot something into that.”

Yee echoed these thoughts: “‘Classical music’ is such a big theme these days, and so people did things that we ourselves would have had no idea to ask for. It’s really cool to allow other people to surprise you. From the beginning, we didn’t want ChamberQUEER to just be what these four people think the future of classical music will be. That’s not interesting! The four of us are such a small part of what it means to be a queer musician. You get stuff that’s way more surprising and exciting when you let others take the reins.”

Once the artistic collaborators have settled on a vision, it’s then necessary to work backwards and create the funding and rehearsal structures necessary for these visions to come to life. Much of the administrative work of ChamberQUEER involves reverse-engineering their concerts to secure funding for their activities, back-translating the language of artists into the language of granting bodies after the concepts are pinned down. This is to say nothing of publicity, scheduling, and the myriad other details that make up a musical collective’s nitty-gritty day-to-day. With funding from a New Music USA grant, the group was recently able to hire an additional team member to handle some of the administrative backend, a move made to help Yee step back and care for their new baby. (“I no longer know what balance is!”, they joked, when I asked how they were balancing the demands of parenthood against the rigors of a performer’s life.)

This slight expansion and formalization extends beyond the members of the team to the venues ChamberQUEER presents in as well. In their first year, they presented at bars, co-working spaces, and ad-hoc multi-purpose studio rooms. Such venues are still on the table—the heart of their 2022 Pride festival offering again took place in a saloon—but they also presented two celebratory Pride concerts at National Sawdust this year, which is anything but ad hoc. In a bar, the acoustic is whatever it is, and there’s usually not much you can do about it. National Sawdust offers other options. 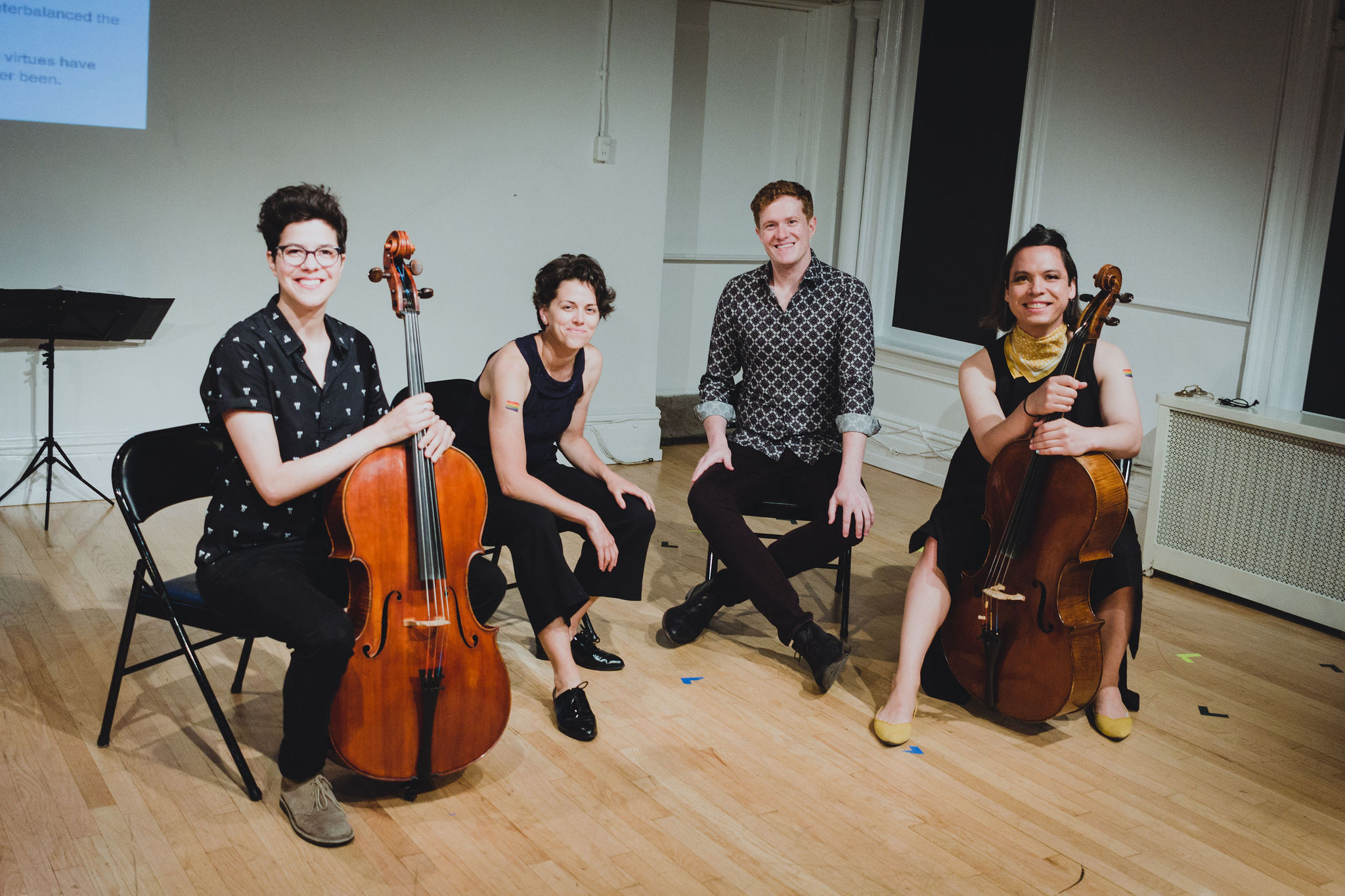 “From the beginning, we didn’t want ChamberQUEER to just be what these four people think the future of classical music will be. That’s not interesting! The four of us are such a small part of what it means to be a queer musician. You get stuff that’s way more surprising and exciting when you let others take the reins.”

“I’m playing this Tania León piece on one of our concerts,” Yee enthused, “And even though it doesn’t make any sense, I’m begging them to let me use the new Constellation® sound system.” Yee explained that the system both enhances the acoustic of National Sawdust’s hall and also allows a sound engineer to “throw” a performer’s sound around the space, making it sound like they’re playing in a different part of the room than the one they’re actually in. “It’s great. You really feel the space. The sound has always been great at National Sawdust. But there’s a way you expect a small room to sound, and this sound system really makes it sound exciting. It’s the difference between going to a community movie theater and going to an IMAX.”

Even in more formal venues, however, the ChamberQUEER founders are holding close to their community-centric values. “For me, and for a few other people I’ve talked to, performing with ChamberQUEER has felt like a transformative thing,” Yee said. “It’s a space where you don’t have to cater to the current New York way of existing, which is sort of the equivalent of 1950’s everybody else.” Buonaiuto described a similar tension between the energy inside ChamberQUEER and the energy of the surrounding classical music scene. “What we’re doing feels important to people,” she said, “But it feels important to people in a different way than it feels important to us. It feels important to us because it’s our thriving and flourishing and liberation and joy, and it feels important to other people because of ‘diversity’. And that’s not a bad thing, necessarily, but if I were to wish for other organizations to do anything, it would be to look at their structure and not just their programming, to think about whether they’re practicing what they preach. Even we need to do that reflection.”

Throughout our conversation, both Buonaiuto and Yee constantly returned to the language of trying, of exploring, of letting a process play out without knowing exactly what the end result would be. Three years into their existence, ChamberQUEER may have more experience under their belt, but they don’t seem to be locked into a singular paradigm; they seem buoyant, curious, even playful. They may, as they repeatedly insisted, be only one small facet of the chamber music world, but in this moment of so much tumult, grief, and despair, they’re a facet I would gladly spend more time with.

Mx brin solomon writes words and music in various genres and is doing its best to queer all of them. Its musicals has been praised for their "extraordinary songs" that "add magic to otherwise ordinary lives", and its latest one-act play has been described as "agitprop for Julia Serano". As a music journalist, solomon has written for NewMusicBox, Opera America, San Francisco Classical Voice, The Log Journal, and other outlets.

This article is made possible with support from the Rubin Institute for Music Criticism at San Francisco Conservatory of Music and the Ann and Gordon Getty Foundation.