History, Not Nostalgia: An Appreciation of James Baldwin

History, Not Nostalgia: An Appreciation of James Baldwin

“We are living through a certain kind of turmoil which endangers all of our relationships. This turmoil is sometimes described as racial. We can use that word for the moment. But it is really not racial. It is historical and it is personal… It is my responsibility, speaking now as your educator, to give you as true a version of your history as I can. It is through your sense of history that you arrive at your own identity. And no one has ever arrived at his sense of identity without it.”
Baldwin speaking to high school students, 1963

“I think our problem as Americans is that we actually hate history, so we can’t really connect the dots.
What we love is nostalgia.”
Spoken word poet Regie Gibson, 2018

James Baldwin never had a problem with history. His biggest problem was America. It still is. For Baldwin, “the big lie” is nothing new. It is not about one election, however crucial that one was. It is not even about one era or movement. It is about the very bedrock of our society and civility as Americans. History has no place in nostalgia. Maybe that’s why even the great James Baldwin, while respected his entire life, was not always invited to the artist-activist-changemaker conversations of the day. His being a forceful, forthright, eloquent, and erudite gay black man was no small part of his being perceived as a threat in certain circles. But Baldwin lived long enough and wrote, spoke, debated, taught, and lived deeply enough that most of his detractors eventually walked back their denouncements and became allies of his.

A writer’s voice, like any work or element of art, is not static. It is a lifelong, even eternal conversation between the listener, reader, and the personal and global times in which that exchange takes place. I first became enamored with Baldwin’s voice when I came across this clear-eyed assessment of the American condition at a pivotal turning point in my mid-20s. Sadly, Baldwin had just passed. The veneer of my half-decade “career” as a music publicist and rock journalist was starting to wear thin. The inner voice urging me to return to a more creative path was getting louder by the day. But where would I fit in?

Reading Baldwin’s works, I was inspired by how he boldly embraced all of his complex sides. Whether owning his sexuality or unquestionable commitment to uplifting Black lives in America, while simultaneously living abroad for long stretches and finding psychological and artistic freedom in France and Turkey over America, Baldwin always wrote and spoke truth to power. In Baldwin, anyone who ever felt like an outsider or other found a voice to say, I am not none of the above, I am all of the above. Almost 34 years after his passing, as America deals with a social/racial reckoning like no other, this Native Son’s voice speaks to us louder than ever.

“The only thing that really unites all black men everywhere is the fact that white men are on their necks”
Baldwin interview with Studs Terkel, 1961

To fully explore and appreciate Baldwin’s voice, it is essential to also look at his later writing––following his more celebrated 1960’s works. His final book, The Evidence of Things Not Seen, published in 1985, provides a direct link to 2021.

“Up until, and during that betrayed and co-opted insurrection that American folklore has trivialized into ‘the civil rights movement,’… the myth of integration attacked and began to unravel a tightly woven social fabric. And there could be no more devastating proof of this assault than the slaughter of the children.”
Baldwin, “The Evidence of Things Not Seen,” 1985

The slaughter that time was the 1979-81 “Atlanta Child Murders.” Almost 30 Black children were killed, but less than a quarter of these cases were satisfactorily resolved. In 2019, Mayor Keisha Lance Bottoms ordered the reopening of many of these cases. In his final book, a non-fiction work, Baldwin characterized the 1980s Atlanta Police Department’s (APD), shall we say, selective blindness of justice as akin to the Mississippi authorities investigating the 1964 murder of voting rights activists, Chaney, Goodman, and Schwerner. As the muddy Mississippi River was being dragged in search of those three bodies, numerous Black corpses kept surfacing. Those corpses’ cases remain uninvestigated. 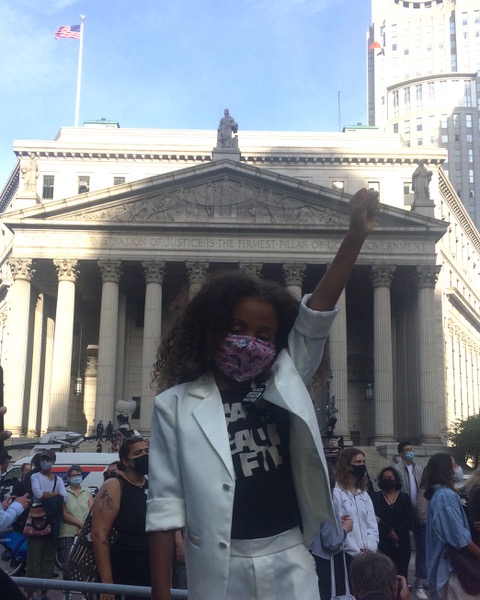 All told, Baldwin was a witness of his time for all time. He was never afraid to go it alone––temporal popularity be damned, long-term, sustained justice be sacred. The questions remain the same from his time. It is up to all of us to make sure these questions are answered very differently. We are all witnesses. We all have voices.

Reading this now as an Asian American processing and pushing back on the increasing rise of anti-Asian Hate Crimes––in frequency and vitriol nationwide––I felt immediate primal recognition. Following the March 16, 2021 Atlanta murder rampage that included six Asian women, APD Captain Jay Baker remarked that the murderer was “fed up and at the end of his rope. Yesterday was a really bad day for him and this is what he did.” A bad day. History not nostalgia.

On the first Friday night following the 2021 Atlanta murders, I gathered with hundreds of New Yorkers of all backgrounds in Union Square at the Asian American Federation’s vigil for these murdered women. On that frigid night, many Asians––particularly immigrant Korean women––felt the urgent heat of that moment and could no longer remain silent and on the sidelines. They DEMANDED to be seen and heard. Witnessing this power and spirit being unearthed before a multi-racial, intergenerational audience of allies was exhilarating. Veteran activists welcomed these new voices speaking truth to power. With power comes many challenges. The biggest challenge being to keep our eyes on the prize without being divided or diluted by the many detractors and distractions…everywhere. I thought again of Baldwin:

“I would like us to do something unprecedented, to create ourselves without finding it necessary to create an enemy.”
Baldwin, “Anti-Semitism and Black Power”  essay, 1967

All told, Baldwin was a witness of his time for all time. He was never afraid to go it alone––temporal popularity be damned, long-term, sustained justice be sacred. The questions remain the same from his time. It is up to all of us to make sure these questions are answered very differently. We are all witnesses. We all have voices. No matter your given and chosen path, and taking spiritual sustenance from Baldwin’s work and life, we must all resist and reverse the big lie of America––the current one and the perennial one. We must bear witness and give voice to a new, inclusive America––one that prioritizes getting and staying on the right side of history for the future instead of being bound to and blinded by the nostalgia of the past.

Alvin Eng is a native NYC playwright, performer and educator. His plays and performances have been seen Off-Broadway, as well as in Paris, Hong Kong and Guangzhou, China. Eng is the author and editor of the oral history/play anthology, Tokens? The NYC Asian American Experience on Stage. His storytelling and commentary have been broadcast and streamed on NPR, among others. Portrait Plays, Eng’s Cycle of Historical Dramas about Artists and Portraiture explore and dramatize the parallels between portraiture, history and power as manifested in the convergence of different disciplines, eras and cultures. Current Projects: Dixon Place 2020 Workshop Residency to develop a solo “acoustic punk raconteur” work, HERE COMES JOHNNY YEN AGAIN (or How I Kicked Punk); 2020 NYSCA/NYFA Fellowship in Nonfiction Literature for his memoir, OUR LAUNDRY, OUR TOWN: Memoir Portraits of an NYC Chinese American Life-In-Progress. www.alvineng.com