Please enjoy to the above playlist as you read this article.

This playlist should be taken in pairs, each a part of my "Raja Routine" done each morning before my day of work began in the studio. It has been built two songs at a time and continues to grow, day by day.

Begin by choosing two songs that are innately different. The way you define that difference is up to you. Stretch for fifteen minutes. Dance to the two selected songs and end by dancing for five minutes in silence, following only your breath.

This was the routine given to me by my friend and collaborator Raja Feather Kelly in preparation for a music video we were set to make the following month. The first day I was shy, even with myself. I told my girlfriend, “whatever you do, don’t come into my studio,” which only made her want to know what was happening in there. I am not a dancer. I’m a composer and a lover of dance and its history—an autodidact at best. My impression of what dance could be expanded one late night in Switzerland while on tour. I was alone in a hotel room watching Pina, the Wim Wenders film about the late Pina Bausch. This was one of those moments when one’s art hits something so dazzling and exciting, at once foreign and familiar, that it ricochets off that thing and continues on a divergent path. This collision came on gradually, and its impact could only be fully discerned with hindsight. It sparked a curiosity about her life and work and led me into a world of archival footage of works by artists like Merce Cunningham, Trisha Brown, Bill T. Jones, Arnie Zane, and Yvonne Rainer.

I realize now that my experience of dance is mostly based on video and video editing via YouTube and Vimeo clips, an education which is fragmented and built on documentaries and algorithm-based suggestions. My relationship with the artists, however, feels personal and foundational. I began editing clips of this archival footage into projections that accompany my live shows, spliced together with footage of early demonstrations from AIDS protests and how people intersect with the natural world (picture a thousand birds being released from the container of a semi-truck), and extreme climate events (picture palm trees in a hurricane and calving ice caps). These are all edited with an agonistic repetition, sometimes slowed, as though they are being detuned, resampled. I was interested in how four disparate pallets could elicit a similar response in me—one of awe, adulation, and urgency. I wanted to point to how the human body mimicked the natural world, whether through the distinctly human choreography of dance or that of protest. These projections, particularly those of the dancers, tricked the audience and me into believing that I wasn’t alone on stage and gave me the illusion that I was composing for dancers. 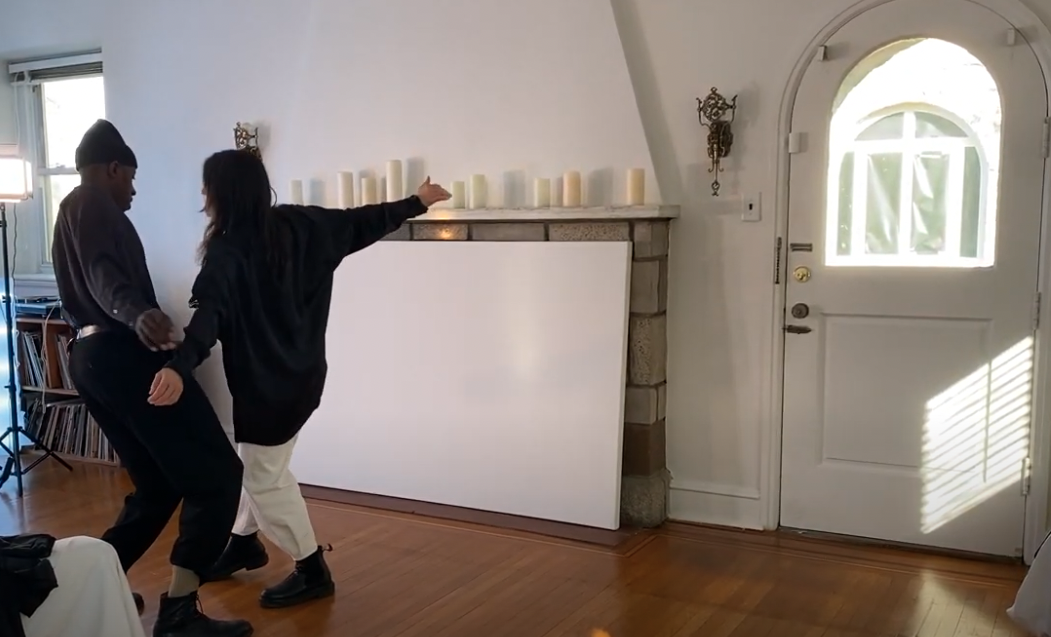 “As the days and hours accumulate I’m reminded of the ways in which practice, steadfast repetition, is a reliable force for both growth and creation. The Raja Routine is akin to the singing or playing of scales, which become arpeggios, which become an extended range, which becomes technique and can translate into a grasp on rudiments and self-possession with which most new things are made.”

These dancers have kept me company on stage for the last six years of touring, and they are whom I brought with me in my imagination to my daily Raja Routine in February of 2022. I was both child and adult, and I was led back to myself, to a body I had always owned but was capable of forgetting. Each day I was loosening: The songs opened themselves to me in a parallel thread of moving and listening, which over time began to collapse into one. I was hearing like a producer—with my ears, as I have grown accustomed—but also with my body. Rhythms, layers, and subtleties revealed themselves through new means. This was a new way to be inside the songs, the recordings, to be overwhelmed by the music itself, to be a new listener, a novice, to be someone who could delight privately without analysis or investigation. I was no longer just ears, but listening with a whole self. I added songs I’d never heard to the playlist, songs that had meant something to me as a teenager, songs that I knew and loved.

A Mazzy Star song unexpectedly gutted me a couple of months in. Joy Division put me inside a youth I never had and tied my wrists to hi-hats. Thom Yorke made me liquid as a fish. As the days and hours accumulate I’m reminded of the ways in which practice, steadfast repetition, is a reliable force for both growth and creation. The Raja Routine is akin to the singing or playing of scales, which become arpeggios, which become an extended range, which becomes technique and can translate into a grasp on rudiments and self-possession with which most new things are made.

I’ve been back on tour for the last two weeks and didn’t have the time nor privacy for The Raja Routine. Each day I felt some essential part of myself slipping a bit. In this way, I knew what the exercise was giving me. That first night on tour, listening to the other band I was out with play, I danced in the audience. It felt like holding hands with myself: familiar, comfortable, delighting. The dancing was a place I’d built for myself. like memorizing a poem—something to recite under my breath in the face of anything. I’m still not a dancer. I don’t want to be. I just want to keep being new each day inside this thing I’ve given myself.

Forging a bridge between pop and chamber music, composer, producer, and video artist Emily Wells builds songs from deliberate strata of vocals, synths, drums, piano, string, and wind instruments. Her evocative music (described as “visionary” by NPR and "thrilling” by Pitchfork) and performances (called “quietly transfixing” by the New York Times) impel listeners to be attuned. Wells’s latest release, the ten-song album Regards to the End, explores the AIDS crisis, climate change, and her lived experience watching the world burn. A work of radical empathy, Regards to the End foregrounds the power of art, critique, and care to connect and perhaps redeem us.

Prospective collaborators can reach out to Emily via her management Hannah Houser at hannah@thisismeru.com with information about time frame, budget, location, influences, and any easily accessible links to music/video. Visit Emily’s website or Instagram (@emilywellsmusic) to learn more.

This article is made possible with support from the Rubin Institute for Music Criticism at San Francisco Conservatory of Music and the Ann and Gordon Getty Foundation.

Interactive Presentation with composer Molly Joyce: What Is Care for You?

Thank you! Your submission has been received!
Oops! Something went wrong while submitting the form.