The Sound of the Future? It’s Already Here

The Sound of the Future? It’s Already Here

At National Sawdust, the Constellation and Spacemap® sound systems are making new (and old) sounds possible. Photo by Jill Steinberg

Before concertgoers hear so much as a note at National Sawdust performances, their main impression is the venue’s walls: a collage of white shards with a tread-like texture that are separated by criss-crossing black lines, like an explosion paused in midair.

What the walls conceal, however, is even more striking. Behind them and dotting the hall’s perimeter are 102 speakers that—thanks to the Berkeley-based company Meyer Sound—make Sawdust one of the most distinctive concert spaces in New York City. When sound engineer and designer Garth MacAleavey adjusts a setting, then whistles, the sound booms throughout the hall, as though we were in a cathedral. Then he adjusts another setting, ending the spell: when he claps, the sound, per the hall’s actual acoustics, is dry. Next, using the Spacemap® system, MacAleavey proceeds to move prerecorded sounds through the room: A guitar twang flits from one wall to another and above our heads.

Such are the capabilities of Meyer Sound’s Constellation® and Spacemap® systems, which together allow for immersive, 360-degree sound—an experience typically reserved to facilities that are closed to the public. At Sawdust’s The Future Is… Festival and Creative Forum, composer Greg Wilder, in collaboration with MacAleavey, treated audiences to the full range of the system’s capabilities with a program of historical and contemporary works. “[The system] is not just bigger and louder, though it can be that for sure,” Wilder said. “It really can, from a creative perspective, change the way composers think about music.”

Wilder began working on the show, titled Music in the Constellation, shortly before the pandemic, right as the Constellation and Spacemap systems had been completed. A portion of the program comprised works, such as Frank Zappa’s “While You Were Art II,” that Wilder adapted from their original format to take advantage of the Sawdust space. After failing to wrangle a satisfactory performance from live musicians, Zappa resorted to recording the piece on the Synclavier, an early digital synthesizer available to the few who could stomach its hefty price tag. Though Zappa created the work in stereo, Sawdust’s audience experienced the work in immersive audio, with sound resonating from around the hall. The composer Kui Dong’s first electronic work Flying Apples (1994), also originally produced in stereo, was likewise spatialized.

Music in the Constellation also allowed audiences the rare chance to hear historical works as they were first intended. Karlheinz Stockhausen’s landmark 1955 electronic work Gesang der Jünglinge (Song of the Youths) is written for four speakers—a cutting-edge proposition at the time—though it is seldom performed that way. Sawdust’s system, however, gave the piece that treatment and more via 360-degree sound. When Wilder first heard the Stockhausen at the hall, he was stunned. “It’s almost like saying, I’m aware of Shostakovich symphonies, but I’ve only heard [them] played by a string orchestra. Suddenly, you hear the full orchestration, and you’re like, ah, that makes a lot more sense. The depth of what’s possible becomes clear.” 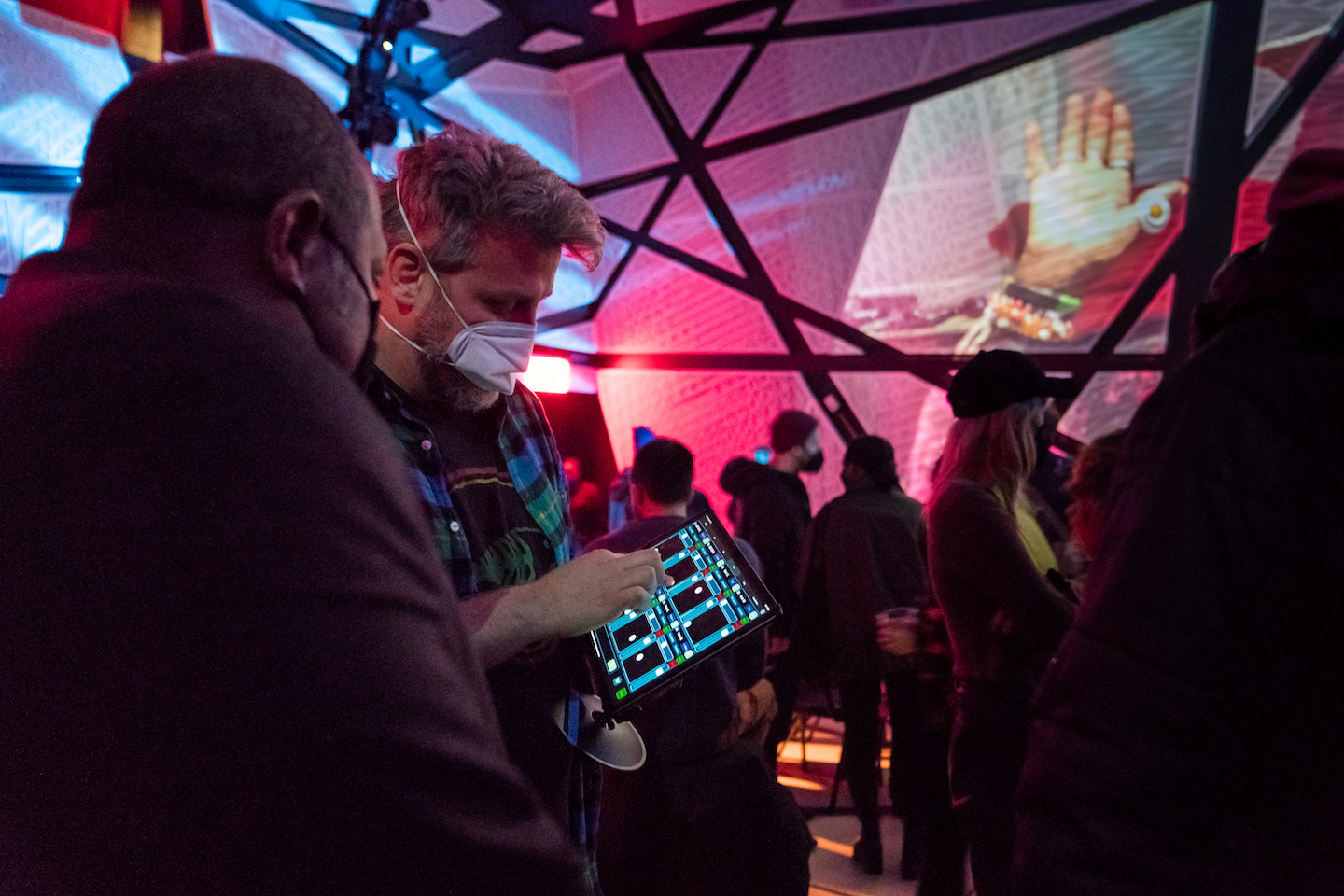 “It’s shocking. This is something you cannot just watch on YouTube or put on headphones and expect to have the same experience. It will change what you expect, what you hear, and how you feel about sound.”

Wilder also programmed the Austrian composer Wolfgang Mitterer’s Hallo Mr. Bruckner (2009) from his album Music for Checking E-mails, which melds electronic sounds with distorted excerpts of orchestral music. Per Mitterer’s original vision, Sawdust delivered these sounds via eight speakers oriented in a ring around the audience. In composer Allan Schindler’s program notes to the next piece on WIlder’s list, the buoyant, complex Vivre (2008), he states that the work achieves its full vivacity when presented in eight channels with a 360-degree horizontal and vertical soundfield. “Adding height,” in other words, allows listeners to experience sound coming not only from in front, but also from behind, around, and above.

In a program of works without human performers, where does an audience look? Options for presenting such works include dimming lights and filling the venue with chairs pointing in different directions, undermining expectations that the sounds will be emanating only from the front. Wilder’s neighbor, the Game of Thrones writer and former NPR journalist Shawn Hurley, narrated a script that guided the audience towards where to listen.

While Music in the Constellation delivered listeners an experience unique to the Sawdust space, Wilder said, immersive sound is already widely available on a smaller scale through virtual reality headsets, which create the illusion of sound moving around you in three-dimensional space. From his new home in the rural White Mountains of New Hampshire, Wilder is building a studio in his RV with the intention of someday driving around North America with his dog, making immersive sound performances available to listeners in different halls across the territory. A composer himself, Wilder hopes to emphasize how such technology is no mere “whizbang,” but rather a powerful and transformative means of communication.

What the Sawdust system makes possible, Wilder said, is a hyperreality, an expression of creative possibilities for sound that do not currently exist. “It’s shocking,” he said. “This is something you cannot just watch on YouTube or put on headphones and expect to have the same experience. It will change what you expect, what you hear, and how you feel about sound.”

Jennifer Gersten is a writer and violinist from Queens, New York pursuing a DMA in violin performance at Stony Brook University. Her work appears in The New Yorker, Rolling Stone, and The Washington Post.

These articles were made possible by the Rubin Institute for Music Criticism at San Francisco Conservatory of Music and the Ann and Gordon Getty Foundation.